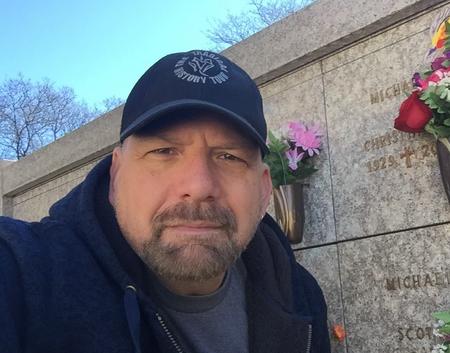 Dearly Departed Tours is the authority on the dark side of Hollywood, and owner Scott Michaels “knows where the bodies are buried” (Los Angeles Times).

Dearly Departed Tours opened in 2005, born out of Michaels’s previous tour experience and findadeath.com, his popular web site chronicling – and often skewering – celebrities and their final exits. Since then, the tours evolved and others — including a Charles Manson-themed “Helter Skelter” excursion — were added to meet continuing fascination with celebrity deaths and Hollywood crime.

In addition, Michaels created and hosted E!’s Hollywood Death Trip, and wrote and produced the full-length documentaries Six Degrees of Helter Skelter and Dearly Departed 1 & 2. Michaels has appeared on the NBC Nightly News, Anderson Cooper 360, Access Hollywood, Ghost Adventures, and Anthony Bourdain’s The Layover. He is a question in the Trivial Pursuit board game and also raised funds to place markers on the graves of half-a-dozen forgotten actors, most recently Ken Weatherwax, who portrayed Pugsley Addams of TV’s Addams Family.

Hailing from Detroit and growing up at one of the most deadly intersections there, Michaels cites his mother’s hobby of creating mosaics from the bits of shattered auto glass as the catalyst for his lifetime penchant of collecting “artifacts” from infamous tragic locations.

Scott was called on by Quentin Tarantino to escort he and his crew to various locations and assist in the production of Once Upon A Time In… Hollywood.  He and Quentin exchanged information (and many nerdy facts!) about the events of 1969.  Scott earned a special on-screen Special Thanks from Quentin.

Here is the links to Scotts many pages: https://linktr.ee/DearlyDeparted?fbclid=IwAR36FDtLcCpr_Vhj-7nwVKJpkwWfIyvHq8hWnUQY-gWEbeghQ7iCkU1nE_Q